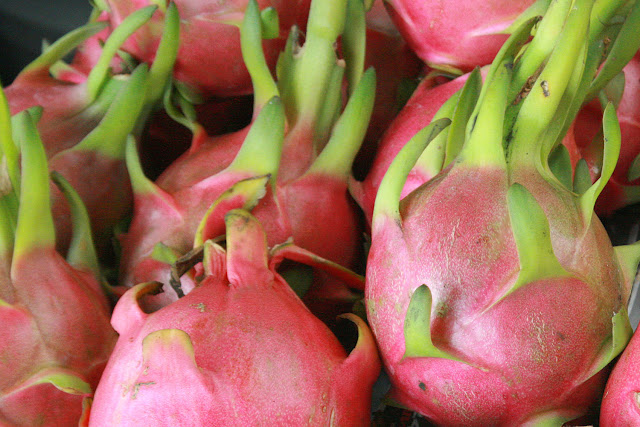 Dragon Fruit, also known as Pitaya, is popular in Thailand however the fruit originally comes from South America where the cactus plants that bear the fruit grow naturally. There are two main types of Dragon Fruit consumed in Thailand, though the difference between the two only becomes obvious once the fruit has been peeled. On the outside both variations of the fruit have a bright magenta skin with yellowish-green appendages that look like a cross between leaves and spikes, though very soft to the touch. On the inside however, the fruit is either white or a deep red-magenta. Dragon Fruit seeds are numerous throughout the fruit pulp and look similar to poppy seeds. The seeds are easy to chew and swallow, making their presence insignificant when consuming the fruit. The magenta fruit pulp contains concentrated pigment that can also serve as a natural dye.

Known by the scientific name Hylocereus undatus, Dragon Fruit comes from various different types of cactus species that occur naturally in Mexico, Central America and South America, and are grown in many Southeast Asian countries such as Thailand, Indonesia, Malaysia and Vietnam. In recent years global demand for Dragon Fruit has continued to rise and therefore farming of the fruit has increased including in the United States. Though Thailand and Vietnam remain the top suppliers of Dragon Fruit worldwide.

While Dragon Fruit is considered to be a super food, it has yet to receive the degree of publicity that other super foods have in recent years. Dragon Fruit should top the list of super foods however, as it contains antioxidants, fiber, large quantities of vitamin C, B1, B2, B3, iron, calcium, and phosphorus, and has been reported to contain anti-inflammatory properties.

At our restaurants Dragon Fruit is a common ingredient to fruit salad dishes and fruit smoothies. Also Dragon Fruit is easy to peel and quick to digest, making it a perfect snack anytime throughout the day or evening. Dragon Fruit is great for preventing dehydration in hot climates, as it contains 90% water.

In addition to the two popular types of Dragon Fruit found in Thailand, several other types exist in various parts of the world including pink and yellow colored versions.

Among the health benefits that Dragon Fruit is known for are:
Next time you see the odd looking magenta colored fruit at the market, think again before moving on. This special fruit with its long history in both the Western and Eastern hemispheres might just be a great new healthy addition to your diet.

Popular posts from this blog

July 27, 2016
All of those in the NYC area who are fans of May Kaidee recipes are in luck. Throughout the month of August May will be offering private cooking classes, demonstrations and ingredient tours in Chinatown.

Please check out the Kickstarter campaign for more information.

A Kickstarter Campaign to Counter Fast Food Madness in the USA

June 08, 2016
We're happy to announce an exciting new project. May herself is planning to tour the USA in a custom designed VW Bus offering Thai vegan cooking classes and dinners, and help to counter the fast food madness that is growing larger every day.

Please check out the Kickstarter campaign. Pledges of all sizes are helpful, starting at just $1.